Unique Innovative Liquid Cotton Kolam/Rangoli Art
My fascination with Kolam begins with the days when my mother (Amma) used to draw different shapes at the entrance of our house. Sometimes she used to draw a pattern on paper especially the geometric ones and then recreate it with the Kolam powder.
On festival days she used to soak the rice and a wee bit of Udad dal/Urad dal and then grind it into a fine paste and dip a small rag cloth (meant especially for the purpose of drawing kolam) into the paste and squeeze with her fingers and make patterns deftly on the ground.
As a child I used to be awe struck and always wanted to try.
Never did it come as perfect as Amma’s.
As the days passed, I did get a hang of it but it would never turn out as perfect as Amma’s.
She was an expert in Ma-kolam and Podi Kolam (Powder Rangoli) and she would draw them religiously each day every day.
A kolam is not drawn only with the purpose of decorating the entrance but it serves a greater purpose of feeding the smaller beings like ants and other insects or even birds, thus defining a harmonious co-existence.
In the South of India, it’s believed that drawing a kolam is to invite Goddess Laxmi who symbolizes wealth and prosperity.
The patterns usually range between geometric and mathematical line drawings around a matrix of dots to free form art work and closed shapes.
Folklore has evolved to mandate that the lines must be completed so as to symbolically prevent evil spirits from entering the inside of the shapes, and thus are they prevented from entering the inside of the home. This means that it is also for good luck and protection.

Evolution of Kolam
As times passed, the humble Kolam Evolved and now we have various types and styles of drawing the kolam like flower rangoli, colored rangoli and water rangoli to name a few.

This is a special type of Rangoli/Kolam made using the traditional south Indian rice paste but drawn using a strand of cotton. (You can either use a cotton bud or a satay stick with cotton wound around it)
We must pull out some cotton so that it comes out like a brush (This part is tricky)

It isn't as easy as it seems.
A lot of control is needed as you are handling a liquid to draw and the strand can give way or change shape while drawing.

This style is innovated by me and is an Improvisation of the Traditional South Indian Ma-kolam, with a twist to help people whose hands have been affected by Arthritis.

How this innovation came into being?
Every year for Festivals, we make Ma-kolam. Ma-kolam is the traditional south Indian Kolam and without drawing it, the festival seems incomplete as it’s a ritualistic tradition passed down from generations together. It is done to welcome the Gods/goddesses to out home on festival days.

I got diagnosed with Arthritis in my early 40’s and started finding it difficult to sit, squat, bend on the floor to draw Ma-kolam.

Since my hands were also affected it became challenging to draw Ma-kolam.

While I was contemplating on a solution, I got the idea of customizing boards being made especially for the purpose.

Once that got done, I started making Ma-kolam on the boards and placed it wherever I wanted it to be placed.

Now, I could sit comfortably at the dining table and draw my Ma-kolam.

No compromise on the rice paste though as I need to serve the greater cause and stick to the traditions as well.

While doing this, last year I wanted to get more innovative and draw festive based themes and not the traditional patterns only.

I shared it on my social media handles and got rave reviews for it.

People personally messaged me to appreciate me on my Kolam designs.

And thus, came into being the Liquid Cotton Kolam / Rangoli

Now I sit where its comfortable and draw the Rangoli on customized boards.

They say that, "Necessity is the mother of invention".

If you want something, you will always try your best and put all your energies in getting it.

Email ThisBlogThis!Share to TwitterShare to FacebookShare to Pinterest
Labels: KOLAM/RANGOLI

About Sukanya's Hobbies and Crafts

This blog is an effort to show that anyone can be artistic. Art is nothing but an idea/thought and its creative application. I owe a big thanks to my dearest hubby who has helped me create wonderful things. Who helped me put my thoughts and ideas into action.

A THERAPIST WITH A HEALING TOUCH – PRITHVI BALAJI 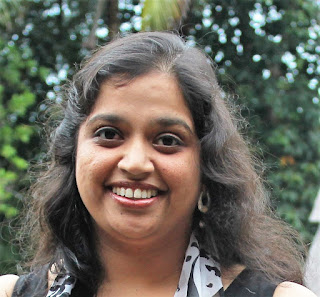 YOU CAN ALSO FIND ME AT